Is it Safe to Take a Bath During a Storm? 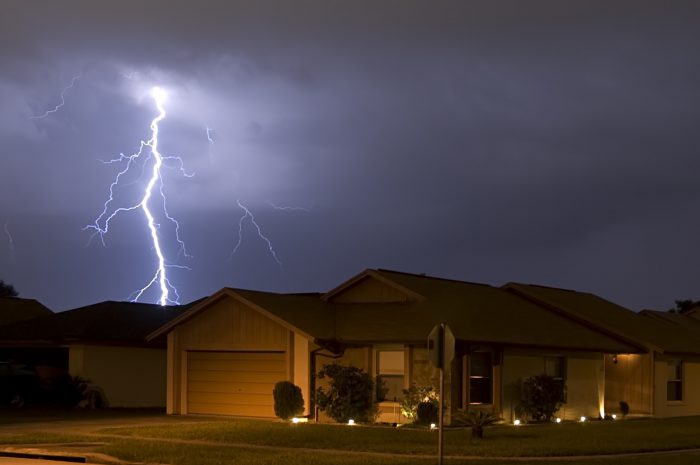 Since you’ve landed on this blog post, we’re willing to bet you’re sitting in your bathrobe on the edge of your tub, watching it fill while you’re listening to rumbling thunder in the distance. To be honest, a nice bubbly soak with a storm soundtrack sounds lovely. But, here’s the deal: It’s a good thing you asked if it’s safe to take a bath during a storm. Because it’s absolutely not.

Why It’s Dangerous to Bathe During a Thunderstorm

Yeah, it’s shocking (Ha! We’re so punny!) to stumble upon an old wives’ tale that’s actually true. But lighting is basically super-charged electricity, and as you may recall from general science in 4th grade, electricity and water are a bad combination. Now, assuming your bathtub’s not out in your front yard, you’re obviously safe from a direct lightning strike. The reason bathing during a storm is dangerous has more to do with the conduction of the lightning than with actual bolt itself. See, the pipes that fill your bathtub are most likely metal—which is highly conductive. Plus, our water has all sorts of impurities with conductive properties. Admittedly, it’s not likely that you’ll get electrocuted if you take a bath during a storm—but it’s entirely possible. Each year, there are between 10-20 documented cases of people getting shocked.

Here’s What Else You Should Avoid During a Storm

When it comes to electrical conduction, the amount of water doesn’t make much difference. That means being submerged in a bath during a storm isn’t any more dangerous than taking a shower. Or doing the dishes or laundry, for that matter. And here’s the really bad news: You should avoid the toilet, too. It goes without saying—but we’ll say it anyway—that you should also avoid anything plugged in: computers, corded phones, or any other powered equipment. (Cell phones are safe to use, though.) In fact, it’s wise to unplug everything that’s not absolutely essential—especially large appliances that’ll be costly to replace if they get fried by a lightning-induced electrical surge.

Protecting Your Home During Thunderstorms

As a Dallas/Fort Worth electrician, we love to help families protect their homes against electrical damage caused by storms. Give us a call to talk about whole-house surge protection, backup generators, and more.