Is it Safe to Cut the Ground Prong?

A short-term solution could cost you more than you think

From time to time, we all ask ourselves biggie questions: Why are we here? Is there life on other planets? Which came first—the chicken or the egg? And why the heck do some, but not all, of my electrical cords have three prongs instead of just two?

OK, OK… maybe that’s not one of your “biggie” questions, but we’re guessing it’s crossed your mind at least once—especially when your plug has three prongs and your extension cord has only two spots. (That’s so aggravating!)

So let’s unpack this mystery.

Why the third prong?

The third prong on an electrical cord is the ground prong. Since plenty of cords have only two, it may not seem terribly important—but it’s an important safety feature that could save your life. Literally. So, in answer to this post’s title: No. It is not safe to cut the ground prong. Ever.

Here’s why: A ground prong creates an emergency path for electricity to travel through if a short circuit or fault happens within the device. All appliances with plugs have other electrical components, like wires. If one of these wires breaks or becomes dislodged, the electrical current won’t flow correctly though the device. At best, this ruins your device. At worst, the misdirected current could give a nasty and potentially lethal shock.

The third prong grounds the device to prevent this issue. If there’s something wrong with your appliance, the grounding prong creates a new, low-resistance path down to the main electrical panel. This trips the breaker, stopping the electrical current and preventing damage to your appliance, a house fire, or an electrical shock.

Ok, so why do some of my appliances have only two prongs?

Some electronic devices are built to prevent an electric overload without a ground prong. An appliance may have an internal voltage adapter so it will never put out a lethal voltage, even in the event of a fault. Other devices have plastic cases or other insulation to shield the device and prevent short circuiting.

Just be sure: Can I get rid of the ground prong?

Definitely not. Again, the ground plug gives an alternative path for electricity to flow if there’s an issue or fault. If you get rid of that third prong, you eliminate the safety measure.

Sure—most of the time, the third prong doesn’t matter at all. Your device is in good shape and is working perfectly. But when there is an issue, it can become life or death. So, no. Don’t get rid of that ground prong!

OK, fine. But my outlet only has two prongs. What now?

Most people make the mistake of cutting the ground prong just so their device will be compatible with a two-prong outlet. Another—safer—solution is to use an adapter.

A three-prong adapter is also called a cheater plug. You’ve seen them before—one side of the adapter has a place to insert your three-prong cord and on the other side there are two prongs that plug into your outlet. What you probably haven’t noticed is the little metal tab that sticks out on the top.

Most people ignore the little tab. They just plug the appliance into the adapter, then the adapter into the outlet. While this is generally safer than removing the ground prong all together, it still doesn’t ground the device properly.

That little tab helps to make the ground connection to the outlet, replacing the grounding work that the third prong would do. To safely use an adapter, you must follow these steps:

Caution: Sometimes it’s not safe to use an adapter.

Adapters don’t always solve the problem. You should never use one in the following situations:

When to Call a Professional

You can find out if your outlets are grounded by purchasing a circuit tester or by calling your Dallas and Fort Worth electricians. Also, if you want to replace your two-prong outlets with upgraded, safer three-prong outlets, we’re happy to help. Give us a call today!

With over 12 years in the industry, we strive to provide the highest level of customer service and craftsmanship. We believe in educating our customers and giving you options then allowing you to make the decision that helps you the most. 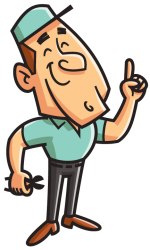